Did this a few months back.  Here is the layout and the final inks.  The pencils for this cover will be for sale in a little bit. 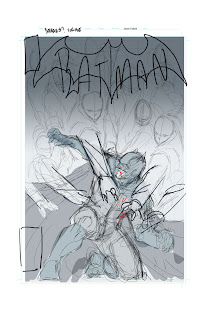 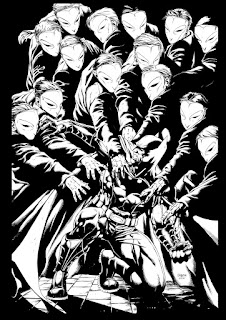 Here is what I mentioned about the cover on DC's THE SOURCE Blog.
“The description for this cover was that Batman was being tackled, or smothered by the Court of Owls,” Fabok told THE SOURCE. “The idea of the court reaching down to Batman in a zombie like manner immediately sprang to mind. Artistically I really wanted to play with the shadows on both Batman and the owl-masked men so I added a strong source light on one side to light the shot. I used my camera on my Macbook to get some rough shadow reference and went from there. I penciled the piece traditionally but inked it digitally on my cintiq. Peter did a great job as usual on colors. I'm very humbled to have had the opportunity to do a BATMAN cover, especially in connection with such an excellent BATMAN run.”
Next time, more Batman Annual #1 news.  I'm into the last act of the book.  It's turning out great so far and oh boy, does it ever have a great ending!  More on that later.
3 comments: