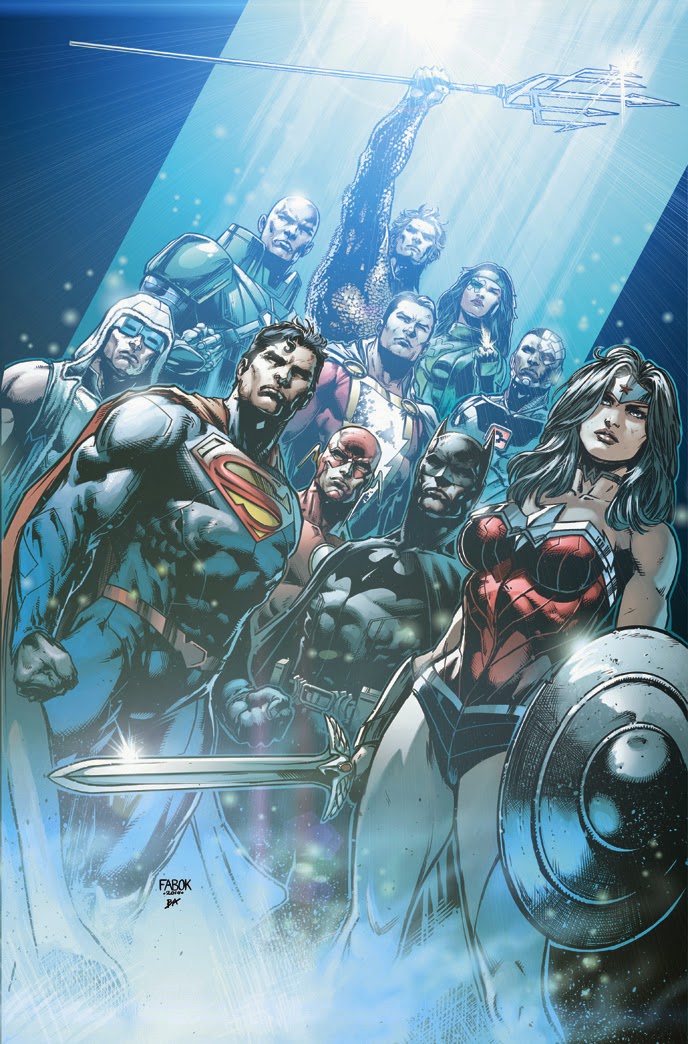 The news broke today on Buzzfeed  (in a rather lackluster fashion, check out the articles on IGN or CBR instead) that I will be joining Geoff Johns on JUSTICE LEAGUE starting with issue 36 and beyond!  I'm very excited for this opportunity and can't wait to dive in head first!  Justice League has been the book I've wanted to draw for a long time, ever since watching the Justice League Animated series.  I've been in seventh heaven for about 2 weeks now since I learned the news myself.

Leaving the Bat-Universe
I've loved every minute of the last 4 years working on the Batman line, and feel very proud at the things I've been able to accomplish there. I do feel that I still have my ultimate Batman story still inside waiting to come out, but I guess we will have to wait and see if I get another opportunity on a Batman book in the future.  Sadly, leaving that universe may mean I never get another shot on the character.  Here's hoping I do one day down the line!
I want to throw a few shout outs to some people who were very instrumental in the success I've had working in the Bat-Universe.
First, to David Finch for the friendship and being a great mentor to me as I started in the industry.  He gave me a shot on Batman: The Dark Knight in the pre New 52 and it really was the book that allowed me to show DC what I could do.
To Mike Marts and Katie Kubert, my editors for the last 4 years, who believed in me enough to give me a shot on Detective Comics.  They both became such great friends, and we were a tight team kicking out books every month.  I miss working with them since they moved to Marvel, but I'm thankful for the time we had on the books we worked on.  I grew so much under their leadership.
To John Layman for writing some great stories for me to draw on Detective and his friendship as we battled the dark forces of Gotham every month.  To Scott Snyder, James Tynion and Kyle Higgins for the great Batman Eternal scripts I was able to draw.  What a joy it was to launch a new Batman #1!
Also to my colorists, Jeromy Cox, Emilio Lopez, Blonde and Brad Anderson for making my work look much better than it is!  And to Peter Steigerwald for teaming up on Batman Annual #1 to tell the new Mr.Freeze origin for the new 52.
And lastly to Mark Doyle and Chris Conroy for stepping in and guiding Batman Eternal when Mike and Katie moved.  They did a great job and the Bat-Books are in good hands.

Justice League and Beyond!
Even though I could have stayed in the Bat-Universe for the rest of my career and been content, when Geoff Johns calls you up and offers you the art lead on Justice League, you take it!  Geoff has been one of my favorite writers of all time, and I think I've read almost everything he's ever written.  Blackest Night was a really big inspiration to me back when I was learning with Dave Finch and ever since then, I've wanted to work with Geoff.  In fact, my main three career goals when I set out in this career were 1) Get a job in comics, 2)Work on Batman and 3) work with Geoff Johns.
To get the opportunity is a little daunting, I must admit.  Im being thrown into a different universe than the one I've been drawing these past few years but I'm also excited for the challenge. Geoff and I have had a few great phone conversations over the past few weeks, and one thing I've seen from Geoff is that his enthusiasm and love for comics in unlike any other writer I've met.  You can't help but get inspired, excited and pumped up for what is to come.  Not to mention its a massive confidence builder to be able to work with a writer of his caliber.  He pitched to me what was going to happen a year down the line on the book before I've even drawn one issue.  I sure hope I can impress him enough to stay on the book for all that time because I really want to draw those ideas!
I've also always dreamed of drawing the big three,  Superman, Wonder Woman and Batman together.  I've always been fascinated with the Flash, Cyborg, Lex Luthor and Shazam and can't wait to see how I'll draw these characters in a few months down the line.  Oh, and then there is Aquaman, who is awesome!  I can't wait to draw him tearing it up.  And then there are the villains...can't spoil it, but it's another example of my dreams coming true on this book!
I also feel like Justice League is a great opportunity to take some chances and change up my layouts a bit.  I hope to create a feeling of "BIG" to the book.  I plan to do more panels that bleed off the edges and characters breaking through panels...like as if the book is too small to contain them.  I hope to clean up my work as a bit as well and not go as grungy, that is until massive city destruction battled happen!  It'll also give me an opportunity to draw some different locations than what I've been used to drawing.  I really feel that it will take me 3 or 4 issues to really figure out where I will go with the characters and look.

Promo Image
Here is a look at the Promo image used to promote the news.  I actually re-drew this thing 3 times (2 hand inked drawings and the final all-digital because of time constraints) before I landed on the one that was used.

Here is the digital inks of the promo image seen above.  I'm still not 100% happy with it because I feel I haven't captured my versions of the characters but that will come in time... 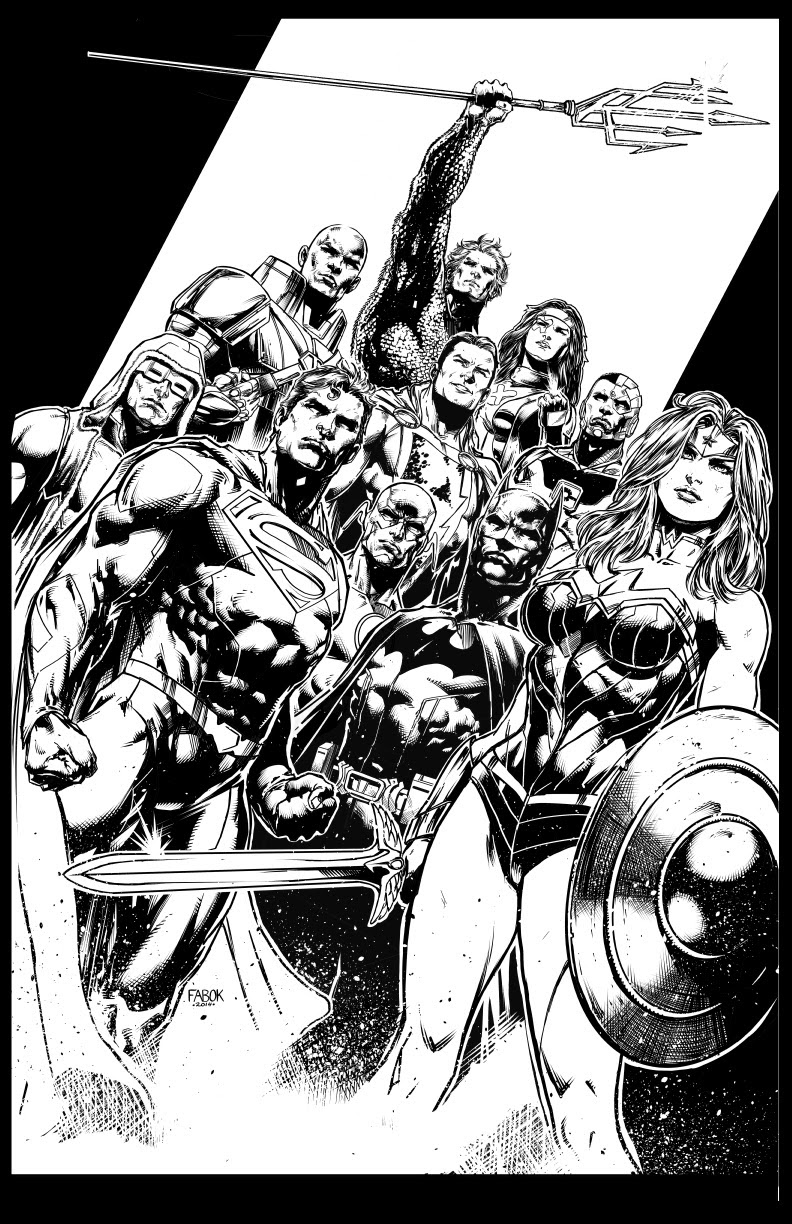 Brad Anderson did some epic colors here.  We removed the light beams and brought out the Big 4 in the front more for the final... 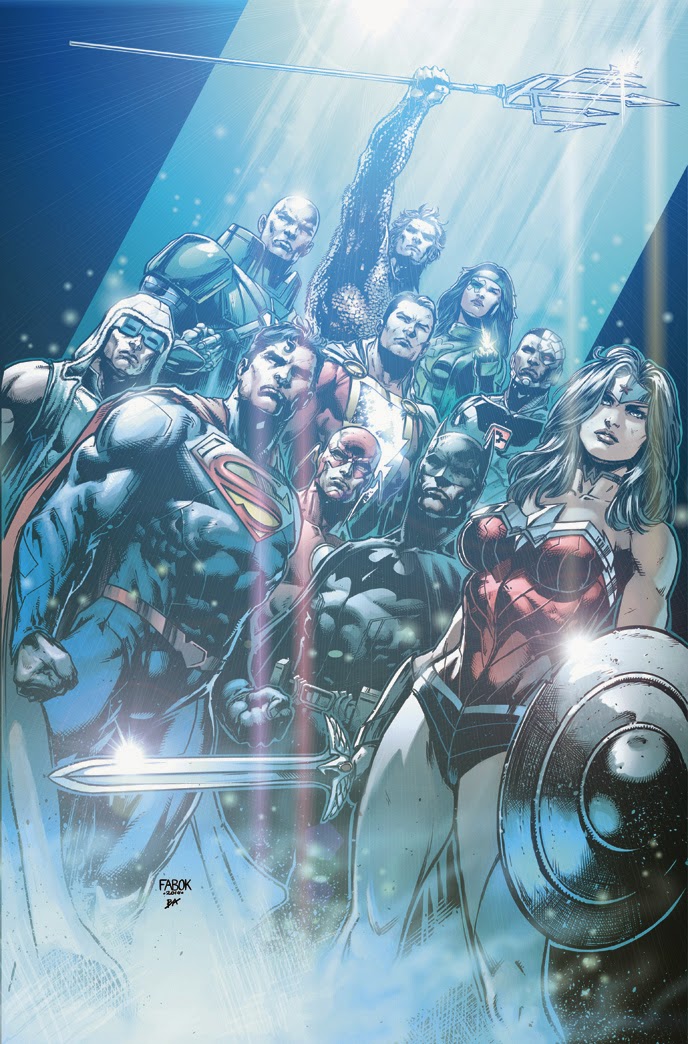 And here's the final image!

I hope to post some more on this project once we get going, but I can say that Geoff pitched me the story arc we will be doing together...and it was amazing!  It'll take a few issues to ease into it, but once the big story-line hits, it's going to be awesome!

Thanks for your support on Batman Eternal and Detective Comics!  I wouldn't have the opportunity to draw such a massive book as Justice League without your support and help!  Thank you!  I hope you will all join me on my next adventure, JUSTICE LEAGUE!