The news hit this morning just ahead of NYCC that I'll be joining writers Scott Snyder and James Tynion on a brand new Batman weekly series titled BATMAN: ETERNAL.  The book launches this coming spring and will feature a while host of different writers and talent (such as my pal John Layman!)

Check out some of the news that is swirling around the internet below:
BATMAN springs ETERNAL -USA Today
Comic Book Resources
Batman's 75th- Newarama

This news of course signals the end of my run on Detective Comics with John Layman.  I've had a blast on the series and right now Im finishing up the final few pages of my last issue on the book which will be published next year.  News hit a few days ago that we we're being replaced on the book and I got an overwhelming response from readers asking me what was up and why they were letting go of us.  Well, the truth is, I was presented with the Batman Weekly project and asked to launch it and continue to be the lead artist on the series and it was too good of an opportunity to turn down.  I decided to leave Detective first, and from there the rest of the changes happened.

But don't despair!  John Layman and I will probably cross paths on the Weekly again.  Ill be starting off the first arc of the book with Scott Snyder and James Tynion and then from there, Ill be settling into a role of working on the bigger arcs and issues on the series.  Im very excited about this opportunity and thankful for DC Comics to allow me to expand my career and work on something this big.


And now for a look at the preview promo art!

When they approched me about doing a promo piece, they wanted a big epic Batman drawing, something that looked classic and bold but also showcased what is to come.  I had been working on a sketch cover when they presented this to me, and I liked what I had on the sketch enough to use it as a base for this layout. 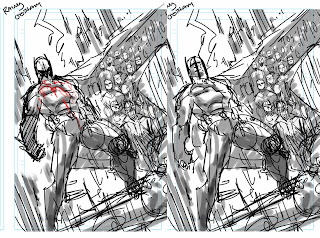 Started with a rough layout to show my editors.  Thought it would be cool to have the characters faces in the cape.  Decided to shift the face a bit and look up.  Big, bold Frank Miller-esque image 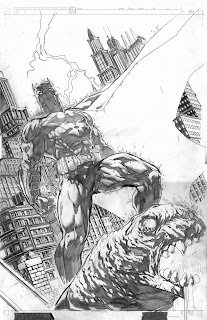 I then moved on to the pencil image.  I kept it rough because I decided I would hand ink this sucker for something different. 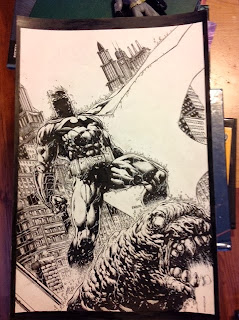 Here's a picture of the final inked image.  I then had to draw the characters into the cape.  So I roughed them into the image digitally and then light tabled them onto the art once I got them sized up. 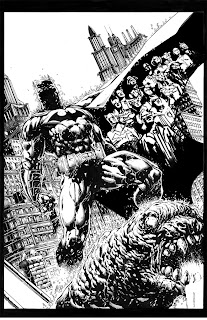 I then added the faces, brought the image into the digital realm and tweaked, added rain ect. 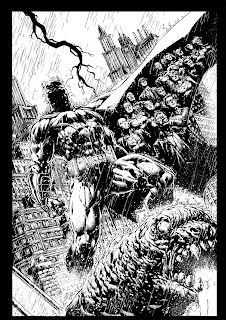 Page was sent to colorist Tomey Moreu who rocked it on colors.
I wanted the faces to be muted, and the background to be greens and oranges.  I don't know why, it just felt like that would be cool. 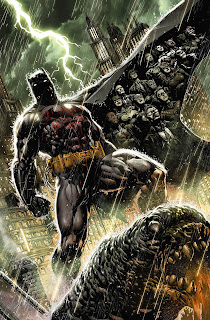 Get ready for an insane romp through Gotham next spring.  I've already read the treatments for this book and right from page 1, there are some big, epic, earth-shattering changes coming to Gotham.  I can't wait for people to check this series out! 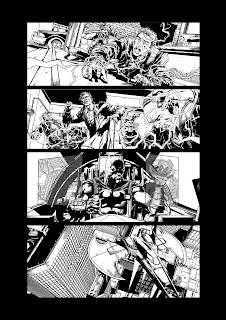 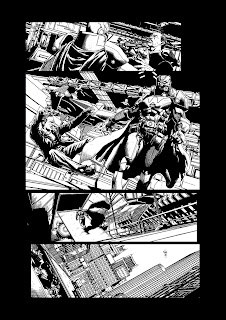 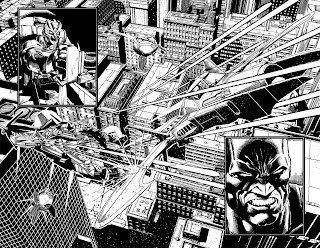 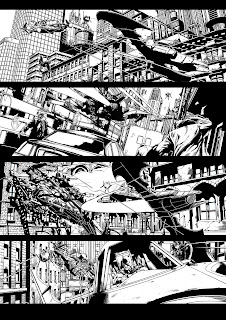 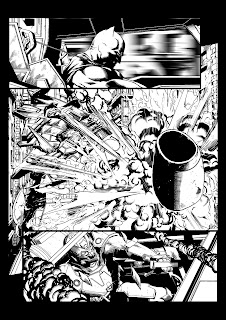 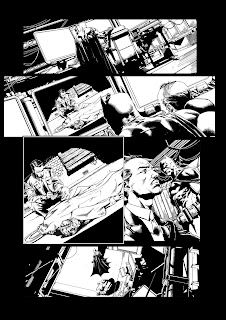 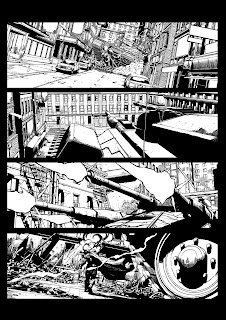 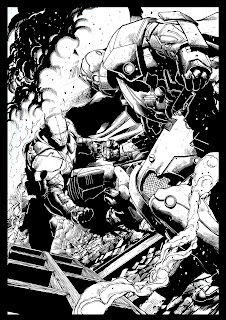 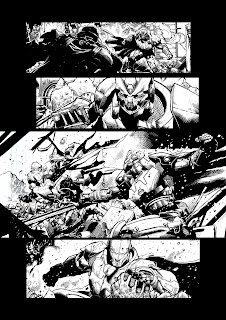 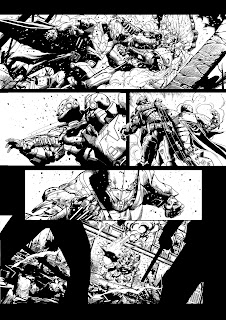 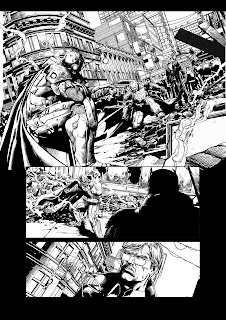 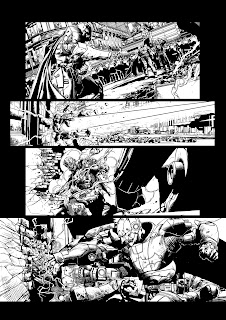 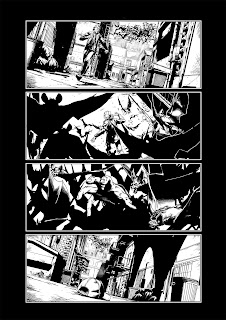 Also, Here is the line art for the Arkham War #2 cover featuring Bane and the Talons! 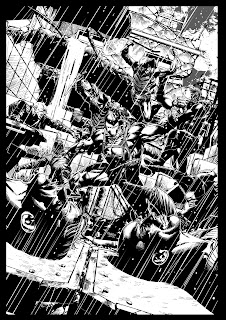 And the cover for next months Detective Comics 25 which is a zero year tie-in.  I've read online that people are going to skip it because it's a "tie-in" but honestly, this is one of my fav issues I've done.  Lots of good stuff here. 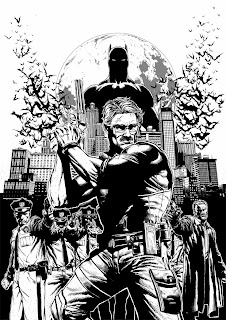 I'm sorry that I haven't updated my blog in a while.  Things have been really, really busy around here for the last few months and I simply haven't gotten around to it.  Here are some pages from Detective Comics 23.
I'll try to post some of the linework from issue 24 next week. 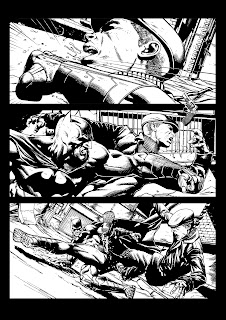 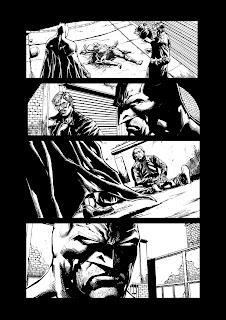 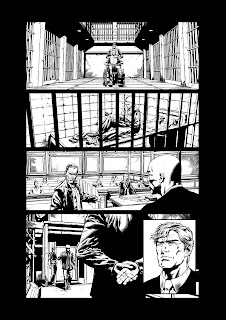 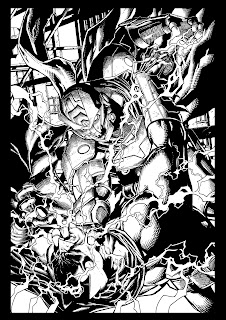 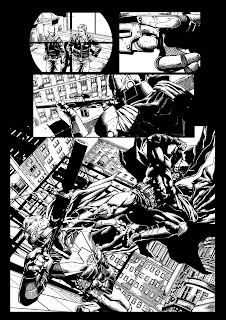 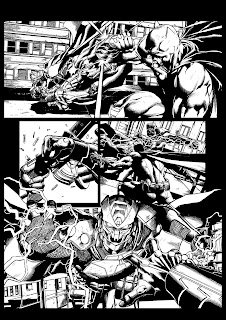 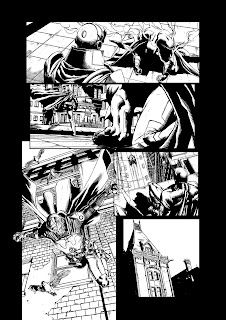 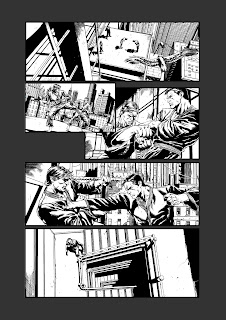 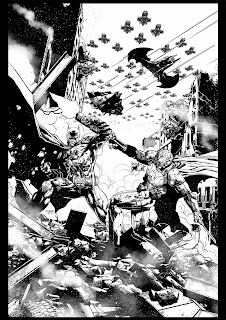 Someone on a comment section mentioned this cover looked too "Sci-Fi" or "Star Wars"....but that was the point! Love having fun trying different things out!